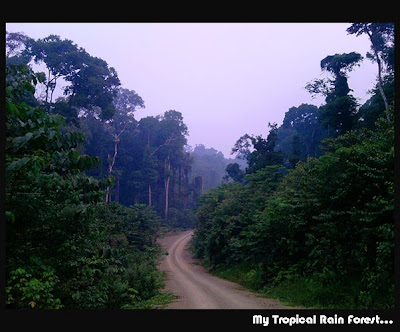 Gambaran keadaan Hutan yang ada di Kabupaten Barito Utara (Batara) per awal September 2009.
Tentang Hutan :
A tropical rainforest is an ecosystem usually found around the equator. They are common in Asia, Australia, Africa, South America, Central America, Mexico and on many of the Pacific Islands. Within the World Wildlife Fund's biome classification, tropical rainforests are considered a type of tropical wet forest (or tropical moist broadleaf forest) and may also be referred to as lowland equatorial evergreen rainforest. Minimum normal annual rainfall between 1,750 millimetres (69 in) and 2,000 millimetres (79 in) occurs in this climate region. Mean monthly temperatures exceed 18 °C (64 °F) during all months of the year. Rainforests are home to half of all the living animal and plant species on the planet. Tropical rain forests are called the "world's largest pharmacy" because over one-quarter of modern medicines originate from its plants. The undergrowth in a rainforest is restricted in many areas by the lack of sunlight at ground level. This makes it possible for people and other animals to walk through the forest. If the leaf canopy is destroyed or thinned for any reason, the ground beneath is soon colonized by a dense tangled growth of vines, shrubs and small trees called a jungle. (Sumber : Wikipedia)
Tweet